Lessons from Montenegro: Why Luxury Lustica Bay Will Never Happen in Croatia

As many major tourism investments in Croatia are stuck for years in paperwork, a luxury revolution is happening to the south in Montenegro.

Just over 3.5 years ago, the journalist wrote an article for a Canadian news site entitled Croatia and Greece: A Tale of Two Nikki Beach Resorts, in which he looked at the fate of two planned resorts where the land was purchased in 2007 and 2006 respectively. The Greek resort announced in 2010 that they would open on August 1, 2014. Greece, a country not known for its efficient bureaucracy, delivered on time. Meanwhile in Croatia, the Norwegian investors who made a sizable downpayment on the 80,000m2 near Sucuraj on eastern Hvar still did not own the land seven years after that purchase in 2007. They even offered to pay the full amount into an escrow account – to be paid to whoever won the ownership claim – if they were allowed to proceed with a EUR 270 million investment which would bring 500 jobs to the town, a request which was rejected. Seven years has become eleven. The realities of property investment in Croatia.

Even projects which seems to have full official support, such as the Four Seasons Brizenica Bay project on Hvar, are encountering problems. Publicly backed by Minister of Tourism Gari Capelli last year at a ceremony near Zagreb and scheduled to open in 2019, no construction work has yet started. The island of Hvar is by no means alone in its problematic building permits. Just ask the Israeli investor above Dubrovnik whose plans for a golf course seem to be ending with a EUR 500 million lawsuit against the State. Or the Russian investor in Dubrovnik’s Hotel Belvedere, where public objections to the development of this once grand Dubrovnik hotel seem to be stymying yet one more major development project.

And while this was all (not) happening, something rather extraordinary was taking place just a few kilometres south of Dubrovnik. A project which was going to transform a staggering 7 million m2 of Lustica into the most ambitious and luxurious development in south-east Europe. A development which was actually happening. Here was a development which was moving full steam ahead which will feature no less than seven luxury hotels, two marinas, an entire small town and entertainment centre, with facilities including a school and an 18-hole Gary Player golf course. The first of the hotels, the luxury Chedi Lustica Bay is due to open in July, with marina promenade, restaurants and shops, while some of the residential parts of the development opened two years ago (with buyers from over 30 countries – including Montenegrins – so far). 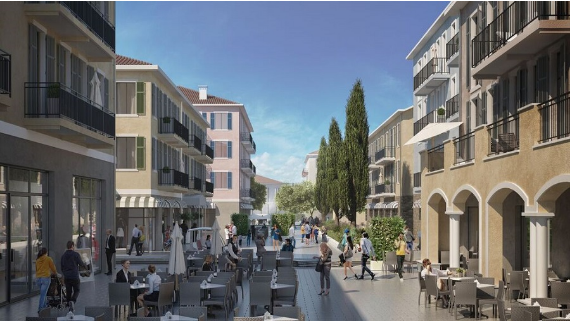 What’s more, the project has already employed hundreds of people; no less than 530 construction workers building, building, building. Of these, 45% were Montenegrin workers (the rest from neighbouring countries such as Serbia and Bosnia and Hercegovina). When the destination fully opens, it will provide 2,500 permanent jobs. These numbers contrast with the reality in Croatia today. Apart from Uber, which is creating 1,500 new full and part-time driver opportunities a year, the largest creator of new jobs in Croatia in 2016 was a construction company with just 723 new jobs. Let’s not forget that the population of Croatia (at least those who are left…) is more than six times bigger than Montenegro.

But the creation of jobs for the local community is only a small part as the integration of the local community is at the core of the entire project. Prior to acquiring the site, the developer met with the local villagers from the adjoining village of Radovici. The project was presented, the benefits, employment opportunities explained, and a commitment to invest a minimum of 150,000 euro per year into the Radovici community built into the contract. Last year, that figure amounted to 256,000 euro. Perhaps the most intriguing sponsorship so far has been in the making of a film about the peninsula, The Black Pin, produced by local boy, Ivan Maronović. Watch the trailer here.

The heart and soul of the Lustica Bay resort will be Centrale, a residential and entertainment centre which will provide life twelve months a year, and which can only benefit life on the peninsula. The whole complex is built in traditional Montenegrin stone village style, very authentic and with a truly exceptional attention to detail.

International brands which are avoiding Croatia, are investing in Montenegro away from the coast. Oberoi will open its first resort in the region not on the Adriatic, but on Lake Shkadar, on the border with Albania, while Montenegro’s main ski resort town of Kolasin already boasts a Sheraton, with more on the way.

Montenegro is open for business for luxury tourism development in a way that Croatia is not – and cannot be with the current setup. You can’t blame Tito, socialism or the Serbs for that one.